A little over a year ago I bought the Nom Nom Paleo cookbook on recommendation from my friend Guido. Who subsequently made me a delicious lunch from the recipes in it. That meal had a really delicious kale recipe from Nom Nom that I could eat everyday. Bacon, kale, lemon….enough said. Here’s the one hang up for me with this recipe: You have to cook bacon. Ok ok so maybe that’s not that difficult but if you’re in a hurry and don’t feel like cleaning up greasy dishes (which is me just about every night), you don’t want to take the time to make this recipe.

I felt this exact way the other night when I pulled out my beautiful Dino Kale. So what did I do? I got lazy and improvised. I knew I needed an acidic flavor to mimic the lemon, but in terms of the bacony fatty delight, what would I do. Then it hit me…DUCK FAT! And so was born this delicious and super quick kale side dish.

Directions
Separate the tough stems from the leaves of the kale. Discard stems and chop kale roughly into smaller pieces. Wash the kale thoroughly in a colander.

Melt duck fat in a skillet over medium heat and add kale. Flip the kale around from top to bottom on the pan intermittently so that it gets evenly cooked.

When the kale close to completely wilted add the apple cider vinegar and stir. Turn the heat up to high for just a few minutes to let the vinegar cook down. Stir to keep from burning to the bottom of the pan.

Sprinkle with salt and pepper and serve. 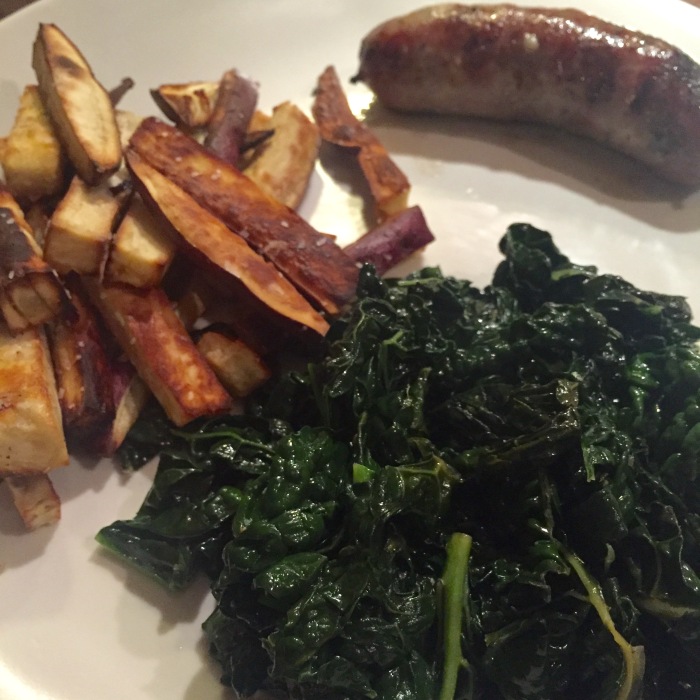 DUCK FAT?
Okay, so here’s the dilly on duck fat. Not only is duck fat delicious and complex, but it’s also a natural form of fat and unless you’re on some sort of low fat diet, is a totally acceptable….some would say preferred…..form of fat. If you’re primal, you will have no issue with health questions here. Secondly, its sounds exotic, but it really isn’t. The duck fat I had, I found at Wegmans. I’d say if you can’t find it, ask someone in the grocery store. It’s probably hiding from you!