In February Josh and I traveled to Thailand. I have to admit; I was a little hesitant when Josh suggested the trip. It was something about the unknown of Southeast Asia that deterred me initially. However, I am so thankful that I didn’t let that prevent us from going. Not only is Thailand beautiful and fascinating but the food is absolutely without question the best I’ve ever eaten. In fact, normally when traveling I end up tired of whatever the local food is, but right up until the last day, we were both scarfing local flav-ahhh. Actually, the best thing I ever ate came from a little Thai lady in a boat with a teeny weeny grill. It was called milk pork and it came on a stick. Obviously!

So I’ve been dying to recreate this food here and decided to try this week. However, I am coming off a food heavy weekend, so instead of using pork, I tried it with shrimp. Dicey, I know. However, the shrimp was amazing albeit not exactly like the pork. But, to be fair…nothing ever will be. 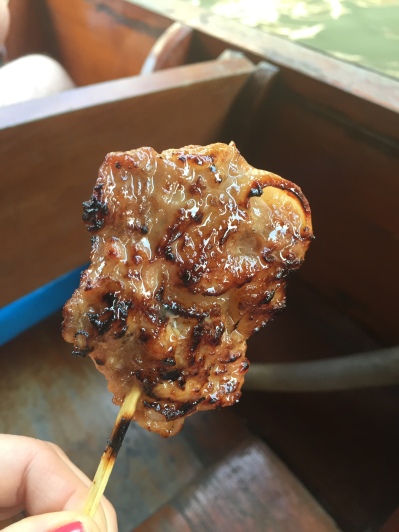 Best thing I ever ate on a floating market outside Bangkok

Direction
Mix first 5 ingredients and submerge shrimp in marinade. Refrigerate overnight. When you are ready to eat, set the shrimp out for about a half hour to come to room temperature. Skewer the shrimps and grill on MEGA high heat for about 2 minutes per side.

That’s it! Super simple. I served the shrimp in romaine lettuce cups with Thai Jasmine rice, sliced mini bell peppers, basil and scallion slices. Halfway through eating them I decided to add Sriracha and chopped cashews, but the original one was the best. I hope you enjoy this as much as Josh and I did and definitely try it with thinly sliced pork at some point too! 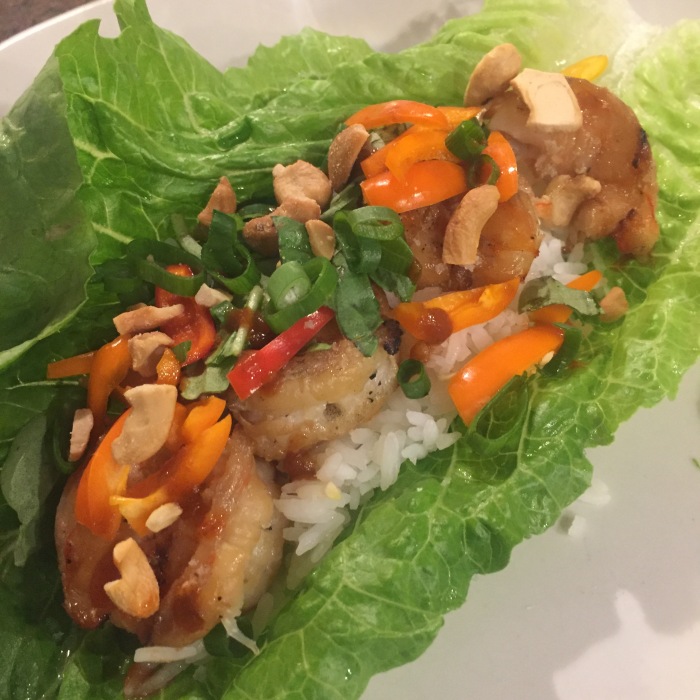