Anytime I get the chance to do the grocery shopping alone, I usually put a dent in the bank account. Josh and I are kind of opposites like that. He goes alone and we barely have enough food to get us through dinner. I go and we’re racking up points on the credit card! What can I say, I absolutely love to buy random proteins and throw them in the freezer for another time. It makes meal planning so much easier.

A few weeks ago I bought duck breast on sale and until Monday night, it had been taunting me from the freezer. There are very few things I’ve not tried to cook. However, for whatever reason duck in any form is one of them. Seems stupid because really it’s just a version of chicken. Right?

Fortunately, I did know a few things prior to attempting to ruin a perfectly good duck breast! One, the skin has to be really crispy or it will be a gooey mess. Two, cherries go perfectly with it.

So after a weekend of eating total crap, I wanted to do some real cooking on Monday night. What I ended up with was actually incredibly quick and easy and also something you could seriously impress people with!

Directions
Preheat oven to 400 degrees. In a small saucepan put in cherry preserves, dried cherries and balsamic vinegar. Do not heat it yet. Season both sides of each duck breast with Borsari. In a large cast iron skillet melt coconut oil over medium high heat. Place duck breasts, skin side down in the pan and cook, without moving, for 7-8 minutes. RESIST the urge to move them. After the full 7-8 minutes, flip the breasts over and put the whole skillet in the over for 10 minutes. Remove the duck breasts from the skillet and let rest for 3-4 minutes. While they are resting, turn the heat on the cherry mix on high heat and stir frequently. After about 4-5 minutes, turn the heat off and let stand. Cut the duck breasts into medallions.

I served this over roasted asparagus, which I cooked in the oven at the same time as the duck.

Drizzle the cherry sauce over the duck and serve. Be sure to keep the sauce handy because trust me, you’re going to want more! The skin was super crispy and the cherries were perfection. 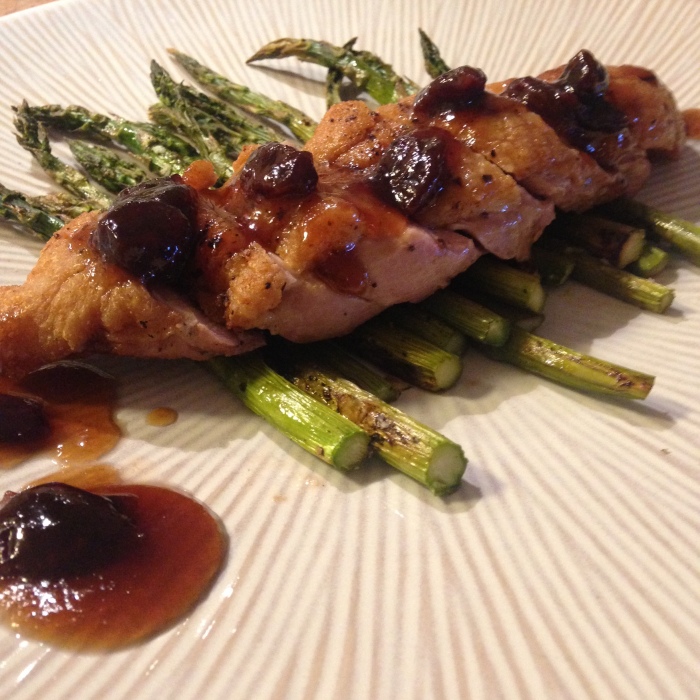 Like I said, this is whoa so easy and super impressive. I mean, I’m no expert photographer and this picture was taken from my phone! The meal totally sells itself! And it is 100 times tastier than it looks!