I grew up eating chicken salad. Not like greens with chicken on it. Like chicken with mayo in it. My mother made the literal best chicken salad any side of the Mason Dixon and that’s a fact. In fact, when I was a teenager, I worked in the country store we owned and when I tell you I made and sold about 900 pounds of chicken salad in any given week, I’m not totally exaggerating. Ask one of my oldest friends, Ash, who worked alongside me. I mean, to give you an idea, we would mix it up with gloved hands because no spoon/spatula/snow shovel could stand up to the mass quantity that was being made at any given time. And it’s not like we just made a ton and threw out the leftovers. People from all over the small town of Frankfort, Kentucky came out daily; ordering chicken salad every which way you can think of. My mom’s chicken salad only has breast meat, red grapes, celery and mayo in it. It’s simple and it’s delicious. I even requested it when she was planning the catering for our wedding. I guess you can take the girl out of the country, but you can’t take the country out of the girl. We may have also had whiskey barrels full of beer and sweet tea vodka, but that’s for a different blog!

So here’s the thing. I am a chicken salad addict. But I try not to eat too much mayo if I can help it, however much I may…do…love it. Additionally, the way we ate it back in the day was either on white bread or a croissant, neither of which appear in my diet these days. So I decided to make a version of chicken salad that would be yummy (not as yummy as my mom’s) but sans all the guilt I get from my mom’s version.

Here’s what I came up with, I hope you like it as much as I did.

Directions
Cut chicken breasts in half horizontally to make thin cutlet-like shapes. Sprinkle each side of the chicken liberally with cumin. Grill on each side approximately 4 minutes or until cooked through. Let the chicken sit and cool. Meanwhile, dice up grape tomatoes, green pepper, jalapeno and red onion. In a food processor mince the jalapeno, but make sure to take out the seeds first, or don’t if you want it really spicy. Chop up the cilantro into a confetti-like consistency. Put everything in a bowl. Chop up half the chicken in a rough but small dice. The other half of the chicken should be chopped up very finely. Add the chicken to the bowl and mix in the guacamole until it has a “creamy” type of consistency. You want the pieces sticking together. Then juice the lime over all of it, sprinkle with salt and pepper and mix thoroughly. Serve in lettuce cups. 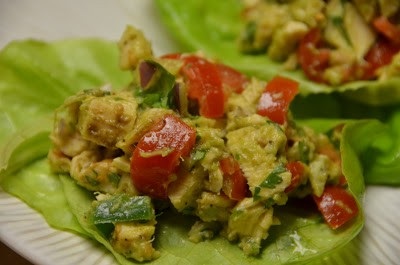 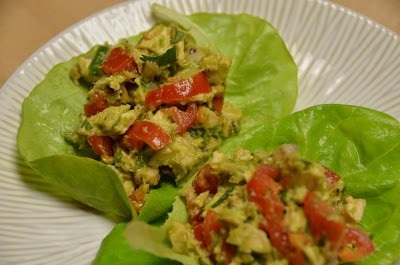 Verdict? It’s not the same as my mom’s. But I never expected it to be. What it is; is a really yummy healthy alternative! Josh and I both really loved it and I know you will too!